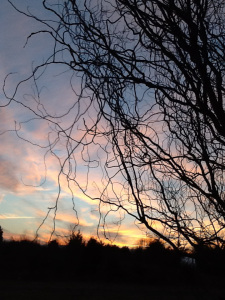 It was a quiet evening at sundown as I walked around the corner of my house. When I looked up towards the western sky I was startled to see our willow tree sorely pruned. I looked at it wondering if it would ever grow back to its original stature. All of its delicate branches curled down ward were gone. Could it ever be beautiful again?  I felt a little sadness, somehow I knew it had to be this way. The tree was cleared of every pest infested, diseased, and broken branch. It was a clearing of the (would be) debris field before the storm.  Something caught my eye to the right, as the sky darkened. A movement towards me, I then realized a book was being placed before me. It was a teal colored, thin, book with a long title; embossed in gold lettering. I couldn’t make out the entire title of the book, but was able to see these words very clear as the gold lettering glowed in the twilight, the words read-

THE WINNOWED AND THE PRUNED.

Earlier that day I had literally drove past a tree much like the one I saw in this prophetic dream. It was located on the corner of Government and Sycamore. Immediately, when I saw the  tree pruned as it was, I felt the Spirit of God come over me and I knew a message would be drawn from what I seen, and one did. A recording of it can be found at Remnant Nation Radio with Newine Pouring. The Winnowed and The Pruned along with Clearing The Debris Field are two parts of a whole. One addresses Christian America, the other, all of those in Christ. To drive home the point, the city I live in had began to prune trees away from the power lines up and down the streets, they did this the entire week I was preparing to record the pod-cast. I could not help take from that, a parallel of how much our broken, pest infested, and diseased branches of government are needing this word regarding the winnowed and the pruned, in order to retain its power and influence in the earth.

Weeks later, when an ice storm rolled into the region our little community was the few that did not have power interruptions. The fact of the matter is that we will have storms, how we fare when we do depends on our preparation, and readiness to respond to the Spirit of God. God wills that NO MAN perishes, but that all come to the saving knowledge of Jesus Christ.

Most of us understand the significance of the Sycamore tree explained very well in the book called the Harbinger by Jonathan Cahn. While we as a country have pushed upward and onward, endeavoring to rebuild where we have been broken, we have ignored the lessons of the kingdom regarding what it takes to become strong. Humble yourself in the sight of the Lord, and He will lift you up. To be God strong in America we must decrease, bow our greatness to the sovereign God in repentances, and become the people who are the winnowed, and the pruned. This in return will remove the debris field before the storm, rather than after, where time and chance takes its erratic path.

in a dream, in a vision of the night, when deep sleep falls upon the children of men …